What Colour Are Your Eyes?

...this just jogged something else loose for me.  Anyone else notice that hardly anybody here is black?  That seems pretty strange, what with sagging having its roots in hip hop culture. If for s

Hellooo blue eyes 😀    Hmm... Not sure what you're implying but there are black saggers on SW I've seen lots of amazing content as there is on social media platforms. I also see lots 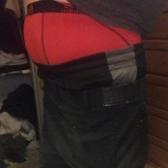 Light blue to light grey depending on what I am wearing for a shirt. If its a grey shirt, bluer eyes, if its a blue shirt, grey eyes