Laying on bed, then releasing it on my abs and chest or on my bf. 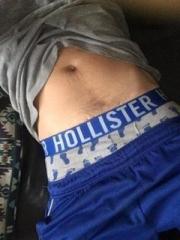 I normally shoot my load so it lands on the floor. Mostly wearing a hot sag in front of the mirror. Like the sound when the sperm hits the laminate! Sometimes in my shorts. Tissue is unsexy.